The Broncos QB isn’t the only Jay Cutler making a name for himself.
by Elisabeth Galina
Article

No, this is not a “before and after” photo. 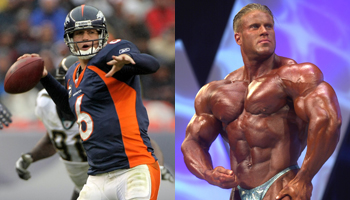 In spite of a defense that surrenders close to 400 yards per game, QB Jay Cutler seems to have willed the Broncos to a 4-2 record going into tonight’s matchup in Foxboro (8:30 p.m., ESPN). But there’s another Jay Cutler out there and he’s huge. This Jay Cutler is a two-time Mr. Olympia, who won his first title in 2006, the same year that the quarterback was drafted in the first round by the Broncos. Confused? Us, too. So we got one of the Jays on the phone. You’ll have to figure out which one.

Mag.com: Do you think you’ll break Dan Marino’s record this season?
Jay Cutler: Definitely. I’m hoping it leads to an endorsement deal with Isotoner gloves. NutriSystem is out, though, because of my contract with MuscleTech.

How’s your relationship with Mike Shanahan?
Unfortunately, it’s not great. He never calls. He never writes. It’s like he doesn’t even know who I am.

What do you really think about Brandon’s legal woes?
I try never to comment on somebody else’s woes.

Think you’ll make it to Tampa?
Maybe. I am usually booked with guest posings every weekend, and Tampa isn’t on the list right now. But you never know, money talks. I could be persuaded.

Do you miss the Commodores?
Dearly. It seems just like yesterday when we were working out.

Think you can tell the difference between the two Jays? Take this quiz and find out:

Latest from the blog

Got a question or inquiry? Drop us a note!